In addition to their traditional role of supervising Trainees, Tower-bound Warders have also taken on a more general training of the Tower Guard. After the events surrounding Tarmon Gai’don, and the Guard falling, Warders have seen fit to create a more elite military force for the defense of Tar Valon as a whole, as they see to the needs of their individual bonded sisters.

They are known as Gaidin [/ˈgaɪ.din/] in the Old Tongue, and are a person, traditionally male (due to the added complications of a same sex bond*), who is bonded by an Aes Sedai through the use of saidar to become her bodyguard and protector.


Warders train on the grounds at the White Tower. Trainees are under the leadership of the Master of the Yard.


The Warder bond is a thing composed of Spirit, a complex weave of over a hundred threads, laid over the Aes Sedai, then connected to the man to be bonded. The bonding of Warders is only permitted to full Aes Sedai; any Accepted who does so, for whatever reason, would face a very harsh penalty. A sister cannot be ordered to take a Warder, even by the Amyrlin, although some sisters have had their arms twisted by Sitters or their Ajah Head.


There is no law limiting the number of Warders. However, by custom all Ajahs except the Green and the Red only permit one Warder. Greens can bond as many as they wish and it is a rare Green who is without one. The Greens with only one Warder are often married to them. For many years, by strong custom Reds were not allowed to bond a Warder at all. For many years following Tarmon Gaidon, given their close work with the Fire Legion of the Black Tower, many Reds bonded with Asha'man. Rahlin's War shattered many of those bonds and the Red resumed a custom-strong-as-law against bonding, especially with men who could channel.


By custom, the Warder must agree to the bond, although he often does not know all it entails. Currently, bonding a man against his will is regarded as akin to rape, yet a thousand years ago it was quite common.


The bond gives the Warder the gift of endurance, quick healing and the ability to sense the taint on the Dark One or Shadowspawn. It also allows him to sense his Aes Sedai and an idea of where she is. The Aes Sedai can also sense her Warder and tell if he is approaching. The other gifts she gains are a closely guarded secret, but they are able to take strength from their Warder, even to the point of death and to use the Power to Compel them into an action. This does not work on a man holding the Power.


While Aes Sedai occasionally force their Warders to obedience through the bond. It is considered too close to Compulsion to be ethical unless very minor and it is impractical besides. A Warder that needs to be forced to do his job is a lot of work and will still not do it very well.


An Aes Sedai regards her Warder as her property, and it is considered rude for any sister to interfere between an Aes Sedai and her Warder, ask questions about them, or give instructions regarding him. Even a Sitter asks a sister for permission before questioning the sister’s Warder.


When her Warder dies, an Aes Sedai feels a deep sense of grief and is usually unable to bond again for quite some time. In the case of the Aes Sedai's death, her Warder will be overcome with rage and will often kill himself avenging her death.


Anyone, from any background may be a Warder (Bonded to an Aes Sedai) or Trainee (students of the Warders in Tar Valon).

* If a bond is made between two females, they may expect strongly felt emotions(embarrassment, anger, passion) to leak from the one experiencing it causing a mirror emotion in the other, unlike in a female/male bond where they may sense one another's emotions, but are not personally affected by them. Additionally, their cycles will likely synchronize.

Based on the time and monetary investment weapons training often occurs, it tends to favor those with an excess of both, i.e. nobility and the independently wealthy.


To date, the Trainees are predominantly composed of nobly born young men who have been sent to study combat of all forms from the masters.


Trainees are not bound to Aes Sedai or the Tower. When they feel their training is complete, there is no formal assessment.* Most commonly they return to their homelands, travel the world, or join the Tower guard, Warder training adding to their prestige.


Those of extraordinary skill may be asked by an Aes Sedai to Bond with her and become her Warder. With increasing numbers of women being raised to the Shawl, the number of Warders being chosen from within the Trainees has risen, but it is not their official function. Aes Sedai still frequently meet and bond their Warders during their travels away from Tar Valon.

* Authors may level up weapons statistics via in character training/tests.

The Keeper of the Chronicles

Affiliations with Other Channelers

The Nation of Tar Valon 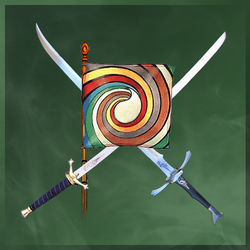