There is a saying that the Wheel of Time turns around Tar Valon, and Tar Valon turns around the Tower, and the second part, at least, is very true. The White Tower rises above every other building in Tar Valon, and can be seen for miles in every direction. Despite the White Tower's importance, however, few people go nearer than a hundred paces unless they have business with the Tower.

The White Tower is a thick, bone-white tower that rises over a hundred spans into the air. The roof is flat topped with a waist-high railing. The Tower is so huge that never since it was built has it been fully occupied until now. There is room in the White Tower for three thousand Aes Sedai. Plans for expansion are being made.

The Aes Sedai employed the Ogier stone-masons and gave them free rein on many of the buildings in Tar Valon, because they "recognized the brilliance of the largely organic forms the Ogier created;" the White Tower is the only known construction to be designed by Aes Sedai.

The bottom half of the Tower is occupied by the main Hall of the Tower, the Kitchens, the Oval Lecture hall, the Traitor's Court, and all other common rooms. The communal areas of the Tower are done in all the colors of the Ajahs.

The Ajah quarters, which are located in the top half of the Tower, are seven pie-shaped sections that contain living quarters for the Aes Sedai. Each Ajah has different styles of decoration that are related to the Ajah's colors and purpose. The Floors are tiled with a colored Flame of Tar Valon.

Novices and Accepted are boarded in a palace-like building attached to the rear of the main tower. The interiors are stone-railed galleries in a hollow well. In the middle of the well is a small garden that is located three levels below; it is only a handful of evergreen bushes. There are two Accepted galleries that can hold nearly two hundred Accepted, as well as two for the novices, which can hold nearly four hundred. Novices are currently two to a room, and construction is underway to expand their available quarters.

It is in the lowest level of the Tower that the test for Aes Sedai is held, in a chamber that holds the oval ring ter'angreal that is used during the test. In the Tower, items of the power are stored in the basement, with the exception of the testing rings, they are kept in a locked storeroom in the second level basement on the northeast side.

The White Tower also contains the greatest library in the known world. While it is considered a part of the White Tower, it is actually in a separate building behind the Tower. It is only partially open to outsiders and is rumored to have as many secret rooms as it does public ones. It is here that angreal, ter'angreal, and the Seed gifted to Elayne Trakand by Rand al'Thor are kept closely guarded. The library is divided into twelve different depositories, each for a different subject. The ninth depository, which is the smallest, is dedicated to arithmetic. The depositories are long, oval rooms with flattened domes for ceilings. They are filled with rows of wooden shelves, with narrow walkways four paces from the ground and tall ladders on wheels.

There are several stables on the grounds of the White Tower. Horses belonging to novices are located in the South Stable.

(Much of this information came from TarValon.net which is an excellent rescource that rivals the fandom wiki page on wikia.)

The Keeper of the Chronicles

Affiliations with Other Channelers

The Nation of Tar Valon 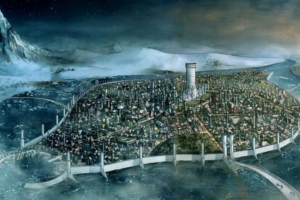